Cardano is an opensource project built by a decentralized community of scientists, engineers, and thought leaders united in a common purpose: to create a technology platform that will ignite the positive change the world needs. The project is developed using a scientific and formal methods, and all implementations are based on evidence-based science and peer-reviewed scientific papers written by the research team. For it to be responsible for a new technology to be deployed and achieve large scale mass-adoption on a global level, a formal, well documented and thorough development approach is a necessity.

The protocol implements a Proof-of-Stake consensus algorithm instead of the outdated Proof-of-Work which for example Bitcoin is using. This makes the validation of the Cardano blockchain a lot more energy efficient than PoW chains.

After the launch of the Cardano Shelley mainnet, it has quickly become among one of the most decentralized blockchain of all. The next steps in the project roadmap includes the implementation of Smart-contracts.

What is Staking (Proof-of-Stake)

ADA held on the Cardano network represents stake in the network, with the size of the stake proportional to the amount of ada held. You can delegate this stake to a stake pool. The more stake is delegated to a stake pool (up to a certain point), the more likely it is to make the next block - and the rewards are shared between everyone who delegated their stake to that stake pool[*]. The stake rewards are paid by the transaction fees in the network, for the block which is being validated.

It is important to note that when you delegate your ADA to a pool, your ADA is completely safe in your wallet, and you can withdraw and re-delegate your ADA at any time. You do NOT lose control of you ADA or need to transfer them out of your own wallet to delegate to a pool.

When will I get rewards?

Below is a flow of the delegation process, and when you will get rewards based on your delegation. 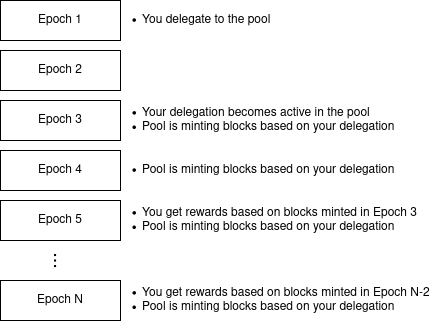 So if you delegate in Epoch 1, the network takes an epoch to register your delegation. Your delegation becomes active in Epoch 3, and the pool will be minting blocks using the active stake. You will get rewards based on your delegation in the beginning of Epoch 5. Each Cardano Epoch is 5 days.

The Pool is setup using my cardano-node docker container which is freely available on github. The docker container automates as many steps as possible in setting up relay and block-producing nodes, following best practices in the setup. The goal of the repository is to make it as easy as possible for anyone to be able to securely setup and run a pool, and provide thorough documentation on to do it. It also provides transparency in how the Arrakis stakepool is setup.

The pool is running on Compute Instances in Google Cloud. Providing high availability, scalability and stability.

Running the pool in Google Cloud also provides extremely fast gigabit internet, which gives a very low latency. The pools physical location is in the Netherlands.

I, the operator of the pool, am a Computer Scientist located in Denmark. I have many years of professional experience with Cloud Computing, Security, DevOps, Software Development, etc. I find the endless possibilites in the blockchain technology extremely fascinating, and I can specially align my personal values with the formal approach that the Cardano blockchain is taking. I hope to help provide decentralization to the Cardano blockchain by running my own stakepool, and write software to automate the process of running a stakepool as much as possible, so everyone who wishes to run one, can do it.